West girls deliver in clutch to thwart Lorena in overtime, 37-35 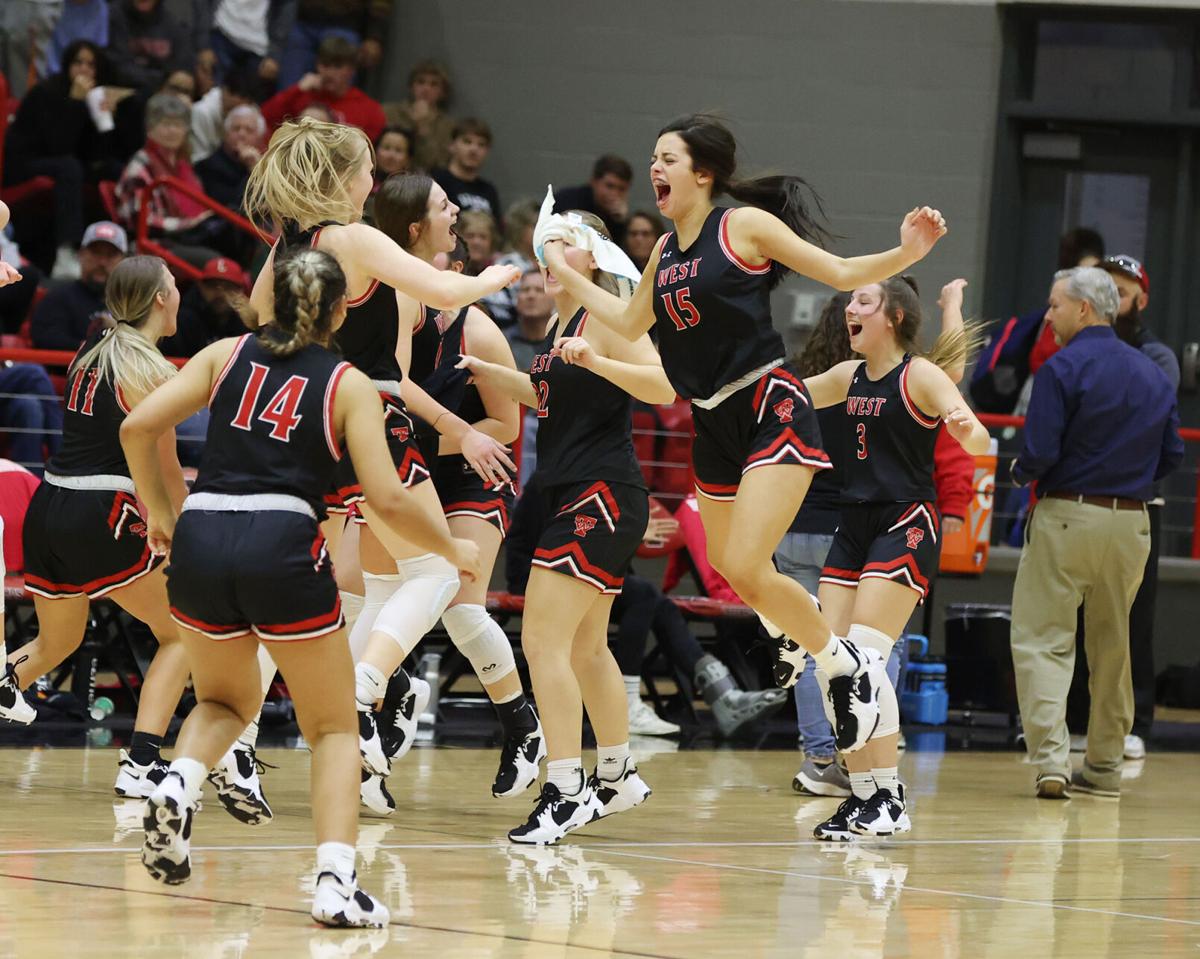 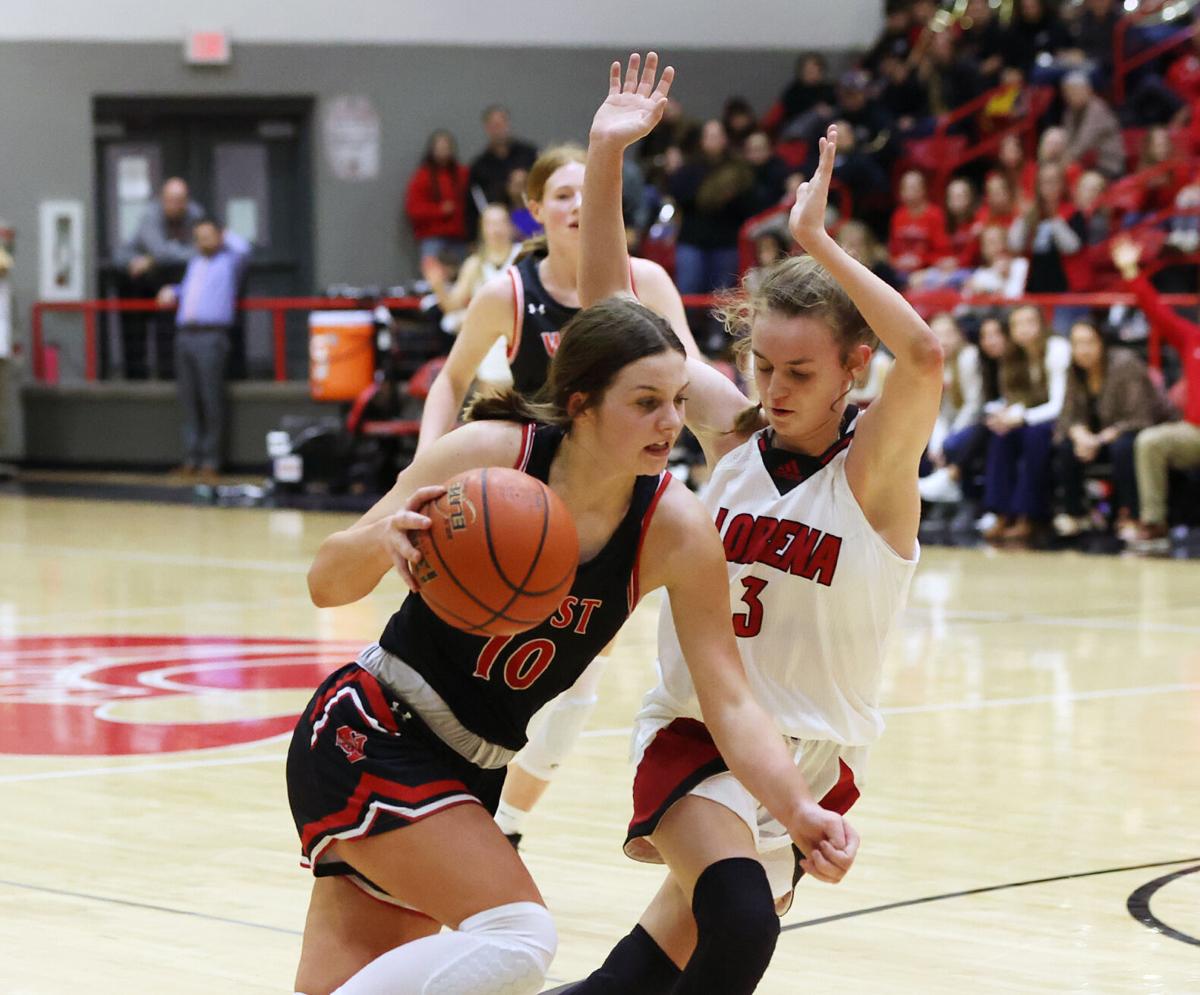 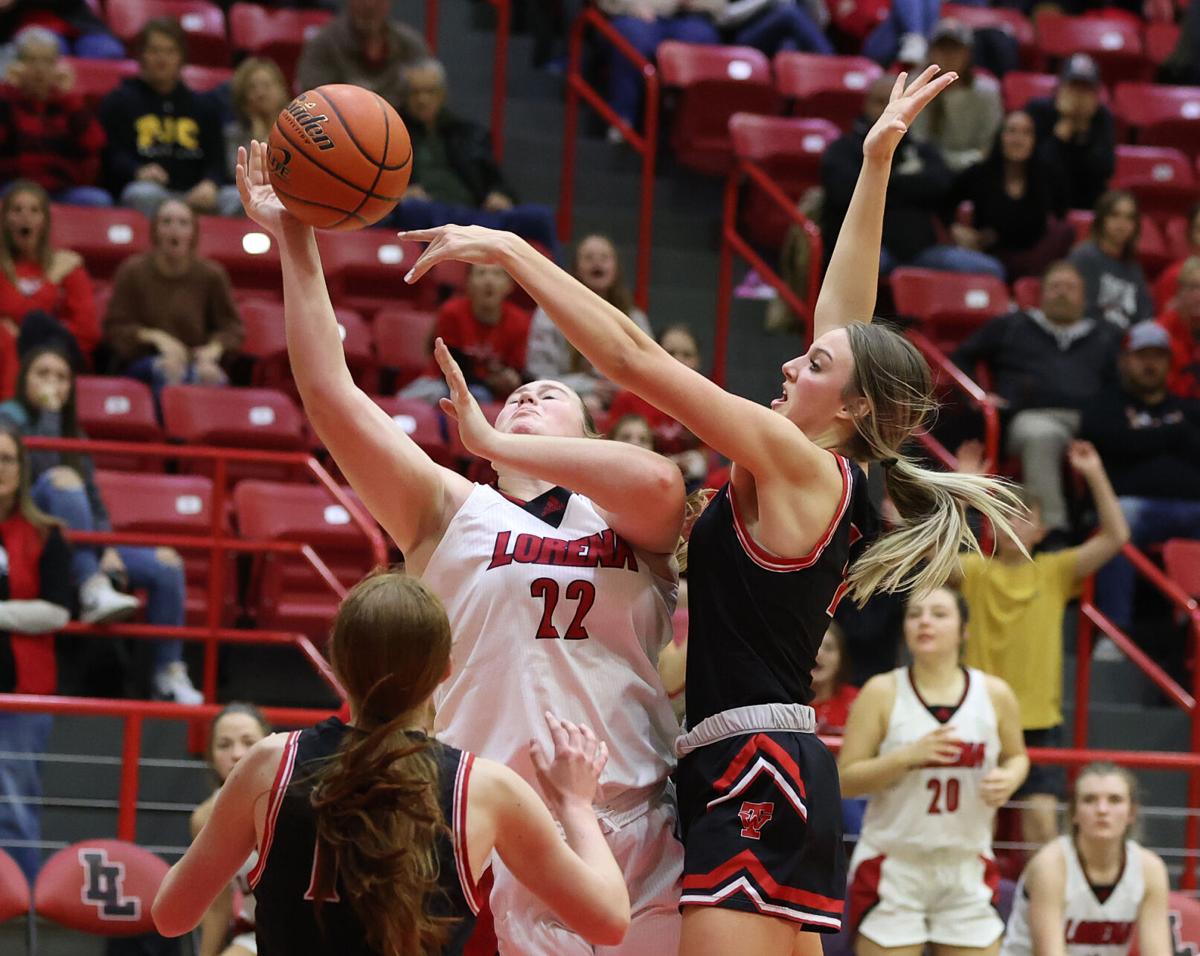 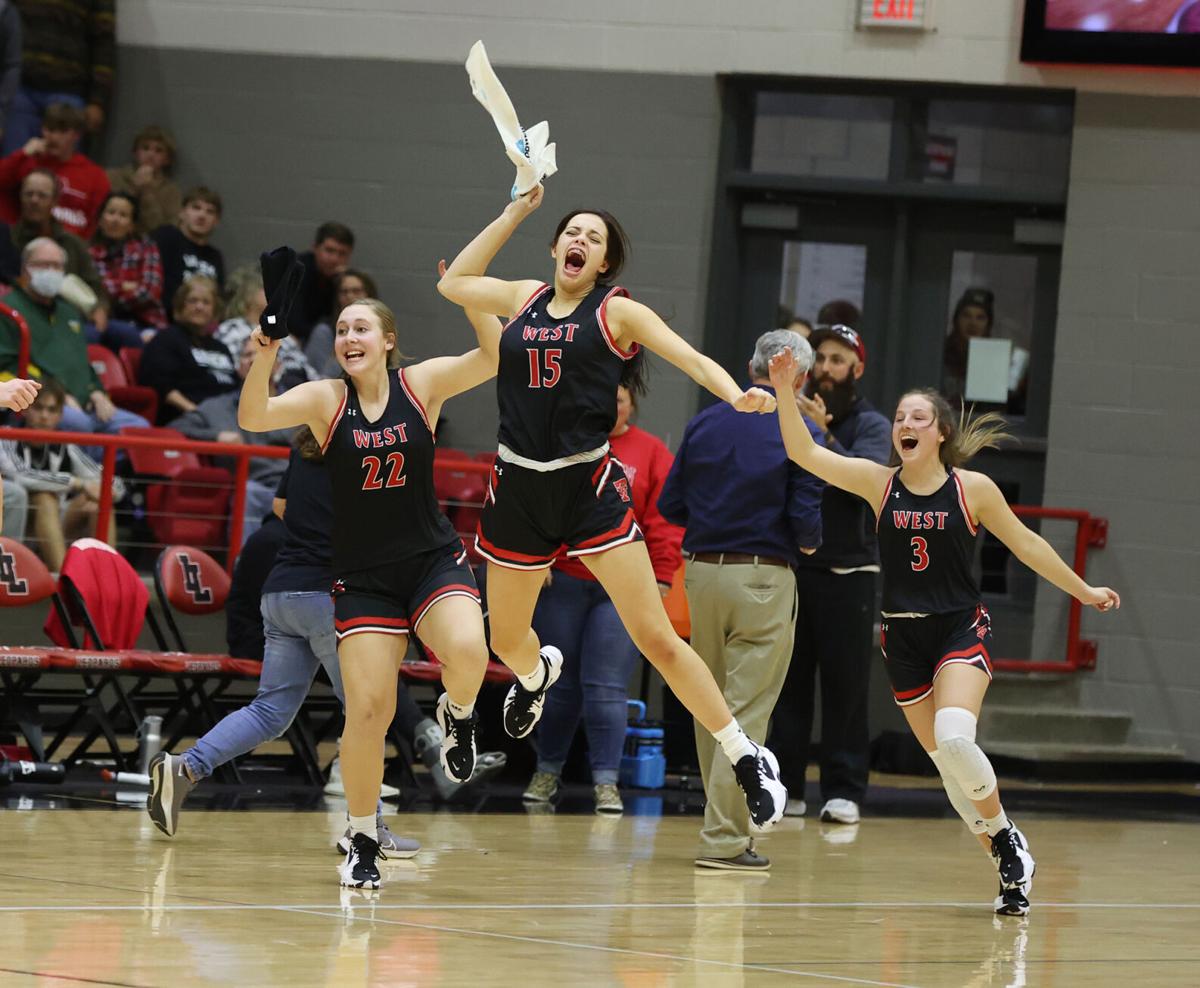 West’s Jailey LeDane (15) leaps in the air while celebrating the Lady Trojans’ overtime win over Lorena. 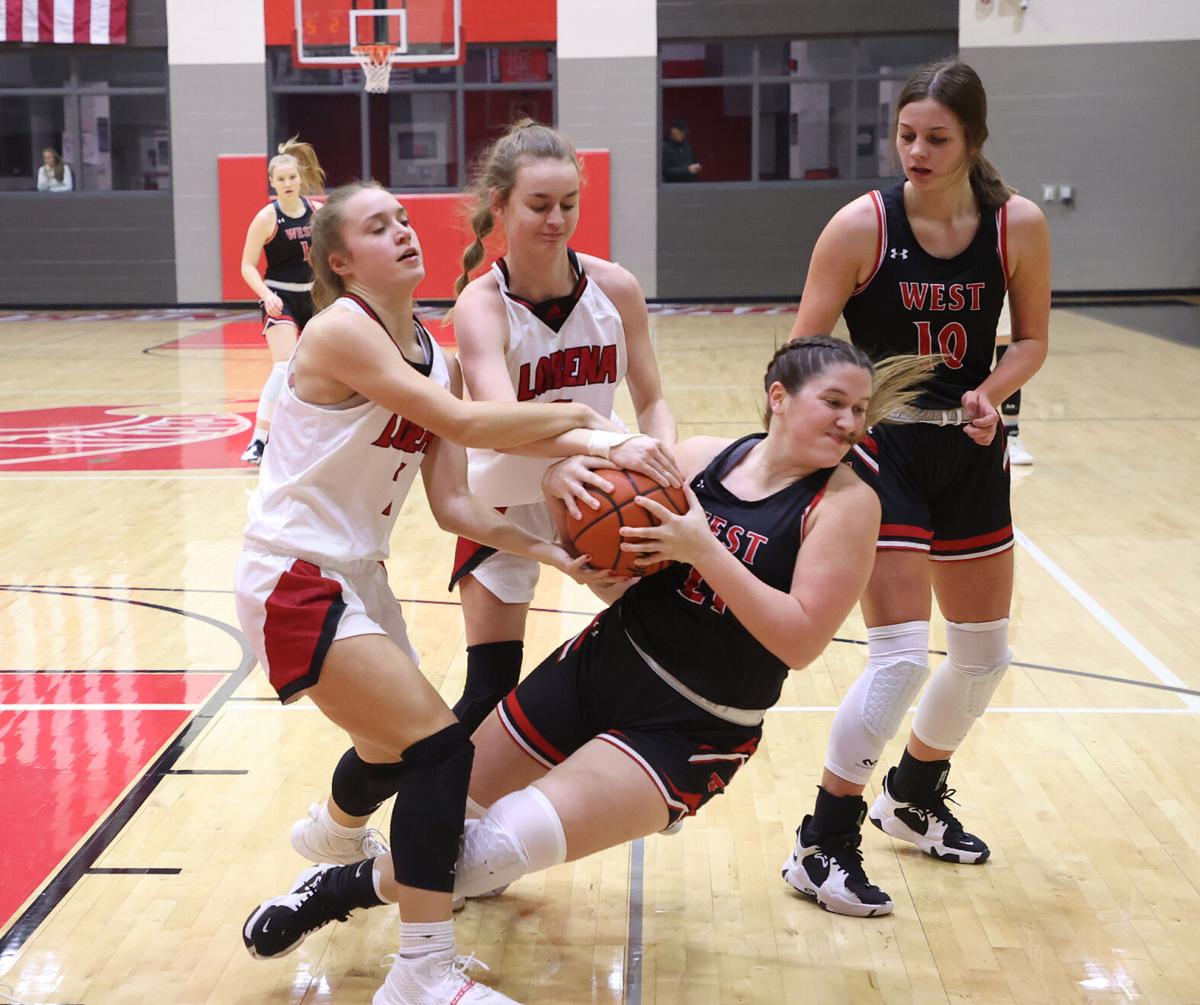 West’s Madyson Hromadka, right, pulls down a loose ball over Lorena’s Kalli Benton, left, in the first half. 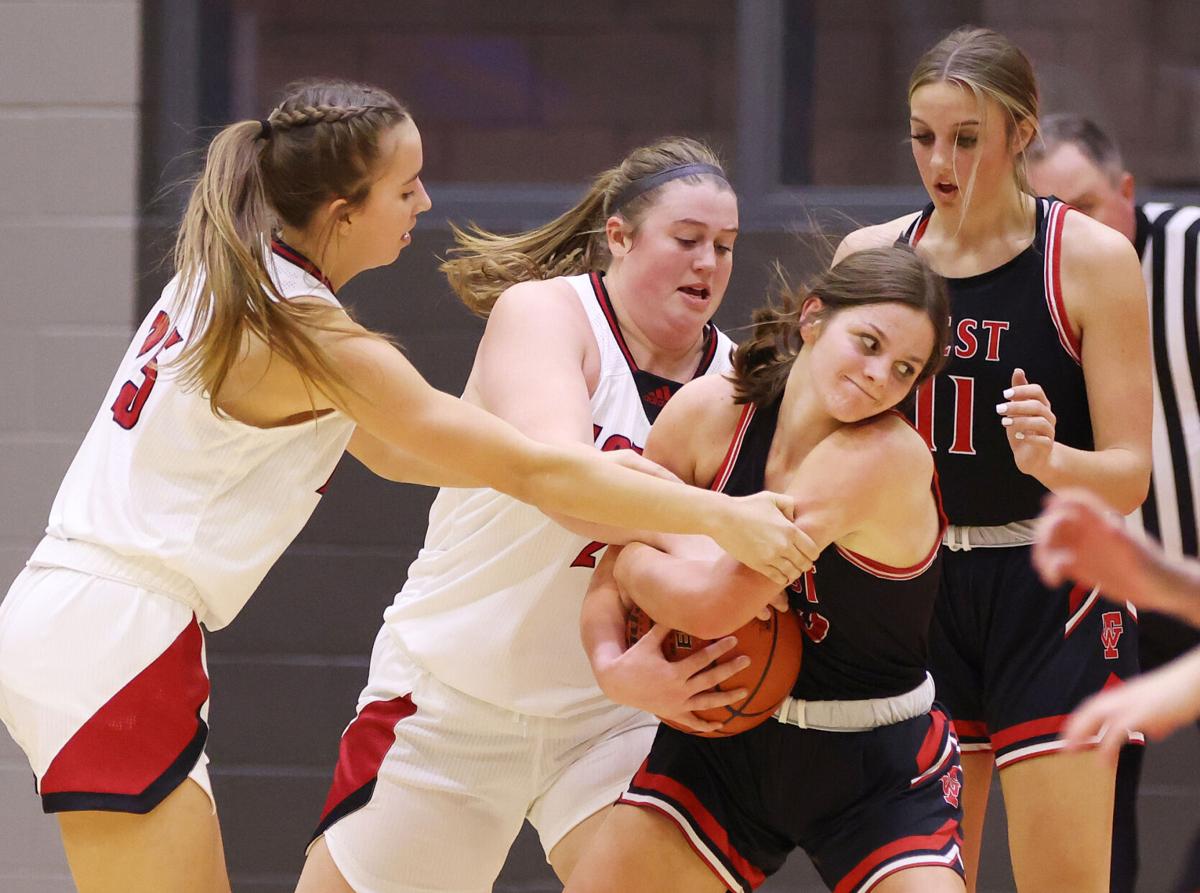 Lorena’s Brinley Allison, right, fights off Lorena’s Kate Houser and Lorena’s Bailey Smedshammer, left, for control of the ball in the first half.

LORENA — First came the runner. Then came the shriekers.

West junior forward Kylee LeDane tossed in the go-ahead bucket on a runner with seven seconds to play in overtime, and Lorena couldn’t answer on the other end. LeDane’s clutch shot, coupled with loads of gritty, resilient defense, sent the Lady Trojans to a 37-35 win in a boisterous District 17-3A battle.

Both teams were unbeaten atop the district coming in, so credit West (18-6 overall, 5-0 in district) with round one on the scorecard.

After the game, the visiting Lady Trojans literally went squealing down the hall on their way to the locker room. They’d earned their shrieks of delight, considering they charged back from an eight-point deficit after three quarters.

“We told them before the game there were going to be times where things go our way and there would be times where it doesn’t, and we just have to weather that,” West coach Kevin Zuehlke said. “I’m so proud of them, because when Lorena took the lead at the end of the first half, then we really struggled offensively in the second half, but our defense just kept us in the game the whole time. Finally, we started getting the shots we wanted in the second half.”

Often, these plucky playoff hopefuls resembled one another. The similarities stretched beyond their identical red and black color schemes. It dug deep into the heart of both squads, as everyone on the court would’ve looked appropriate wearing a raincoat, given how well they all weathered the game’s various storms.

Early on, Lorena (15-9, 4-1) couldn’t find the range. The Lady Leopards — always known for their perimeter prowess — saw several 3-point attempts rattle in and out, and the scrappy West players were there to scoop up the rebounds.

West kept switching its defensive looks, and its sagging zone took away Lorena’s normally effective high-low post game between Kate Houser and Leigh Jespersen. Those two Leopard bigs also got tagged with some early fouls that limited their playing time and, consequently, their production.

And West took advantage. When Dayla Woodard sliced to the goal and took a pass from Madyson Hromadka to score at the 2:47 mark of the opening quarters, the visitors seized a surprising 11-2 advantage. Later near the end of the quarter, the Lady Trojans demonstrated their deft passing touch again when LeDane connected with a wide-open Kera Kaluza, who knocked down the short jumper to give West a 13-4 edge after one.

“I thought our defense kept us in it, I thought we battled quite a bit during that stretch,” Lorena coach Rodney Gee said. “Actually I thought for the first few minutes we didn’t stay in the moment and kind of let it get to 13-2, but after that we really started battling back. We stayed in the moment and just kept pecking away, finally got the lead. We had some chances to put the thing away and we didn’t.”

True, Lorena showed the patience of Job in climbing their way back. Bailey Smedshammer provided the Leopards with a jolt off the bench, aggressively taking the ball to the basket to fuel the Lorena comeback. With 90 seconds to play before halftime, Avery Harris sank a 3-pointer from the corner to push the Leopards to their first lead of the game at 16-15, and that’s the way it would stay at intermission.

Just like their counterparts, Lorena will get after you defensively, too. The Lady Leopards held West without a field goal in both the second and third quarters, as all six of the Lady Trojans’ points during that stretch came from the foul line.

That drought allowed Lorena to widen the gap. Midway through the third quarter, Jespersen poked the ball away from a West dribbler and angled downcourt to score while drawing a foul. Her old-fashioned three-point play pushed the Lorena lead to eight, and the Leopards sustained that edge entering the fourth and final frame.

But West, which was down a usual starter to injury, mustered up all its moxie and scratched its way back. Woodard and LeDane both drilled clutch 3-pointers to spark a fourth-quarter comeback. Then with her team trailing 32-29, Woodard stepped up again by sinking a game-tying trey from the wing with 24 seconds to go. Lorena held for the final shot and got a decent look from Harris, but her 3-pointer rimmed off.

“I’m not real sure what it was, other than the fact that we knew going into the fourth quarter that we were still in it,” West’s Zuehlke said. “We did kind of relax a little bit. I wish I could pinpoint what it was. But we hit a 3, then we started thinking, ‘OK, we can do this.’ Got a little bit closer. Then we got to the next step, and we hit another 3 just to cut it a little bit closer. Once we hit that one that tied it up, from that moment on we really felt, ‘Hey, we can do this.’”

So, the game went to overtime, and for a stretch of that extra period it felt as though a second OT period might be inevitable. With 14 seconds to play, they were all knotted at 35. But then LeDane hit arguably the most difficult shot of the game, as she penetrated to the basket while well-defended by Lorena and tossed in what ultimately amounted to the game-winner with seven ticks on the clock.

“She hit the big 3 earlier and she got a charge earlier,” Zuehlke said of LeDane. “We’ve been really working on that dribble penetration, jump stop and go up. Hasn’t quite caught on totally, but she did a good job on that one. I know she’s capable of that, and she really stepped up big.”

Lorena pushed the ball upcourt and called timeout with 2.2 seconds remaining to set up for the final shot, then took another timeout after seeing West’s defensive alignment. But Gee later regretted calling that one, as the Lady Leopards ultimately didn’t get a good look on their final fling, and West survived.

Woodard paced West with 11 points, while Hromadka added eight before fouling out in the overtime period. Mattison Mechell also scored eight points and had a magnetic attraction to the ball coming off the backboard, snagging a game-high 13 rebounds. Mechell also contributed three steals.

Houser topped Lorena with 10 points. But the Leopards’ chances were hindered by their 1-for-19 shooting from 3-point range, as well as Jespersen fouling out midway through the fourth quarter.

Following the game, both coaches acknowledged that this one goes down as just one game and that there’s still “a ton of basketball to play.” But go ahead and circle round two on your calendars now — Feb. 1, at West, as that very well could set up as the 17-3A championship clash.

The Lady Pirates bounced back from a loss to Bosqueville earlier in the week to take down Moody.

Hattie Hayes scored 12 points for Crawford (11-6 overall, 4-1 in district), while Kylie Ray chipped in 10. With the win, the Lady Pirates ascended into a three-way tie for first in the district along with Bosqueville and Moody.

Sophomore guard Kiyleyah Parr and the red-hot Lady Pirates sizzled past China Spring in a battle of last year’s co-champions of District 18-4A.

Parr put in 17 points for La Vega (20-4, 1-0), which scored in double figures in every quarter. Mar’cyah Willis contributed 10 points.

Sent weekly directly to your inbox!