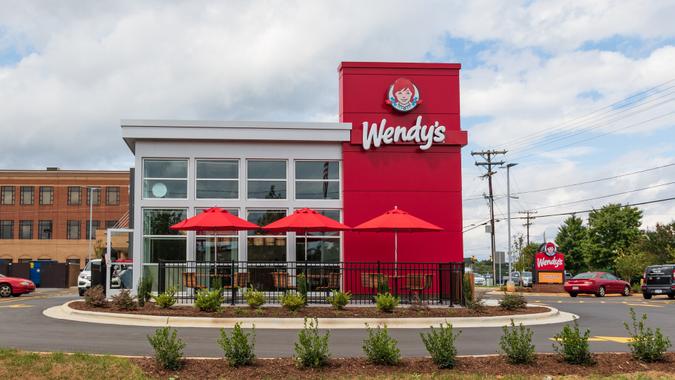 A few weeks following McDonald’s’ entry into the metaverse, Wendy’s has announced a similar move, with the opening of the “Wendyverse” in  Meta’s Horizon Worlds on April 2.

“Wendy’s is teaming up with creators in Meta’s Horizon Worlds to make (virtual) dreams come true with the grand opening of the Wendyverse in Horizon Worlds on April 2. Virtual reality becomes reality as Wendyverse gives fans all-new 3D opportunities to virtually interact with each other and the brand — as only Wendy’s can,” the company said in a statement.

Christophe de Courson, co-founder & Chairman of “Cross The Ages,” a blockchain-based trading card game, told GOBankingRates that while lots of brands are starting to get involved in the metaverse, “at the moment it’s more a marketing ploy than it is a real business strategy, especially for a restaurant.”

“That being said, it’s interesting that Wendy’s is opening their location in Meta’s Horizon Worlds, as opposed to Decentraland or the Sandbox. As the metaverse grows over the next few years, there is going to be competition as to whether big tech’s metaverses, like Horizon Worlds, or decentralized Web3 metaverses like Decentraland end up being the dominant players,” he said. “So far Decentraland has been the most prominent — and most brands in the metaverse have focused on it– but Wendy’s decision to open in Horizon Worlds may be a sign that big tech is catching up.”

Indeed, in February JPMorgan made a big step into the metaverse, becoming the first bank to open a lounge in Decentraland’s Metajuku mall, and in March, banking giant HSBC set a stake in the metaverse through the purchase of a plot of virtual land, becoming the first global financial services provider to enter The Sandbox, as GObankingRates previously reported.

An Oculus blog post explains that if you “ever wanted to visit a larger-than-life world filled with a breakfast sandwich sports arena and an orange Fanta fountain, you can “just grab your Quest 2 on April 2 and head to Horizon Worlds for a burger-fueled VR adventure that would make Dave Thomas proud.”

Launched in 2021, Horizon Worlds is “a free social experience that allows people to explore, play and connect in new and extraordinary ways with immersive VR,” according to the company.

“Inside this whimsical world from Wendy’s, you’ll find Town Square Central–a virtual Wendy’s restaurant complete with an inflatable fry guy you can make dance (if you can find the hidden controller) and Easter eggs that might unlock some free IRL food (mmm, Frosty treats). And over in Partnership Plaza, basketball fans can celebrate in style with a Hot ‘N Juicy jersey cannon and VR Baconators you can throw for a half-court shot at The Buck BiscuitDome,” according to the blog post.

It’s no wonder so many participants are jumping on the metaverse bandwagon — a new Citi report estimates that the total addressable market for the metaverse could be between $8 trillion and $13 trillion by 2030, with total metaverse users numbering around five billion.

See: Metaverse Jobs Reach an All-Time High – How Do You Apply?
Find: Which Companies Are Primed To Excel in the Metaverse?

Josh Gerben, trademark attorney and founder of Gerben Law, who flagged the McDonald’s metaverse trademarks on Twitter in February, told GOBankingRates that many other fast food restaurants, in addition to McDonald’s and Wendy’s, are planning for metaverse locations.

“In just the past few weeks, Pizza Hut, Taco Bell, KFC, Dunkin’, Burger King, Baskin Robbins and Hooters filed trademark applications indicating they plan to open restaurants in the metaverse,” he said.  “Most of the filings noted that the metaverse restaurants will be “virtual restaurants offering delivery of food and beverages.”

Yaël Bizouati-Kennedy is a full-time financial journalist and has written for several publications, including Dow Jones, The Financial Times Group, Bloomberg and Business Insider. She also worked as a vice president/senior content writer for major NYC-based financial companies, including New York Life and MSCI. Yaël is now freelancing and most recently, she co-authored  the book “Blockchain for Medical Research: Accelerating Trust in Healthcare,” with Dr. Sean Manion. (CRC Press, April 2020) She holds two master’s degrees, including one in Journalism from New York University and one in Russian Studies from Université Toulouse-Jean Jaurès, France.