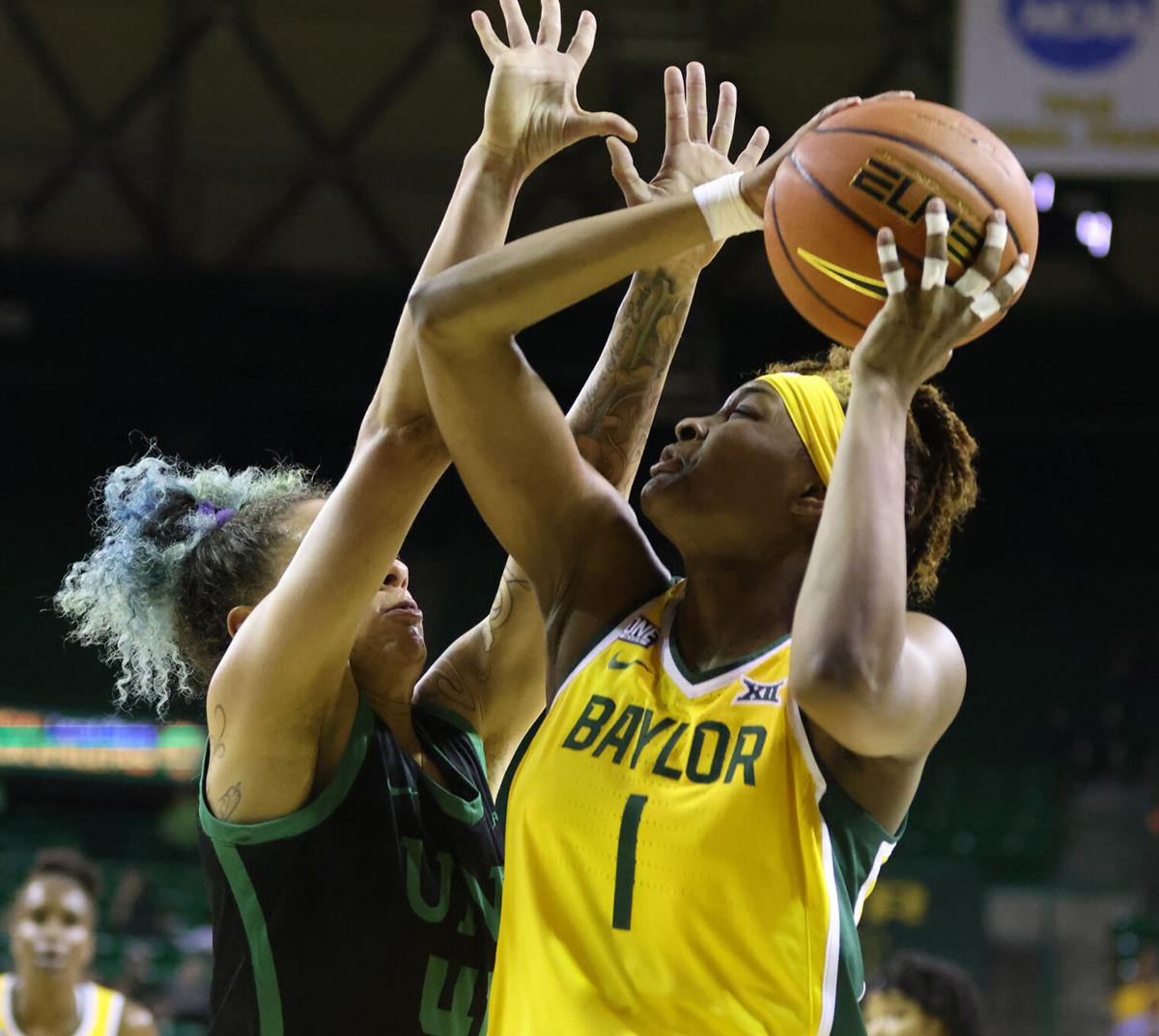 Baylor forward NaLyssa Smith, right, lines up a shot over North Texas forward Madison Townley, left, in the first half. The Bears defeated the Mean Green, 86-65, on Wednesday at the Ferrell Center. 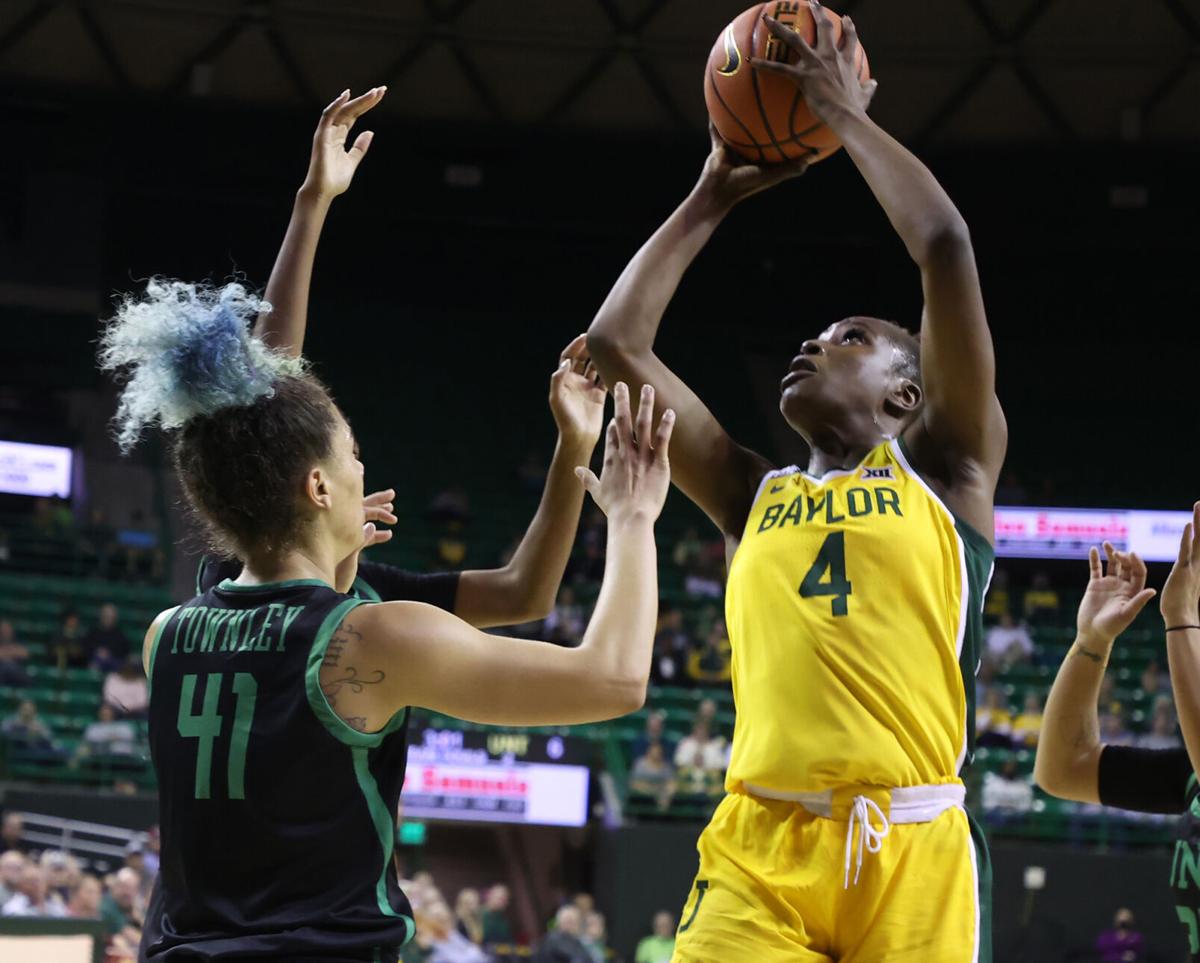 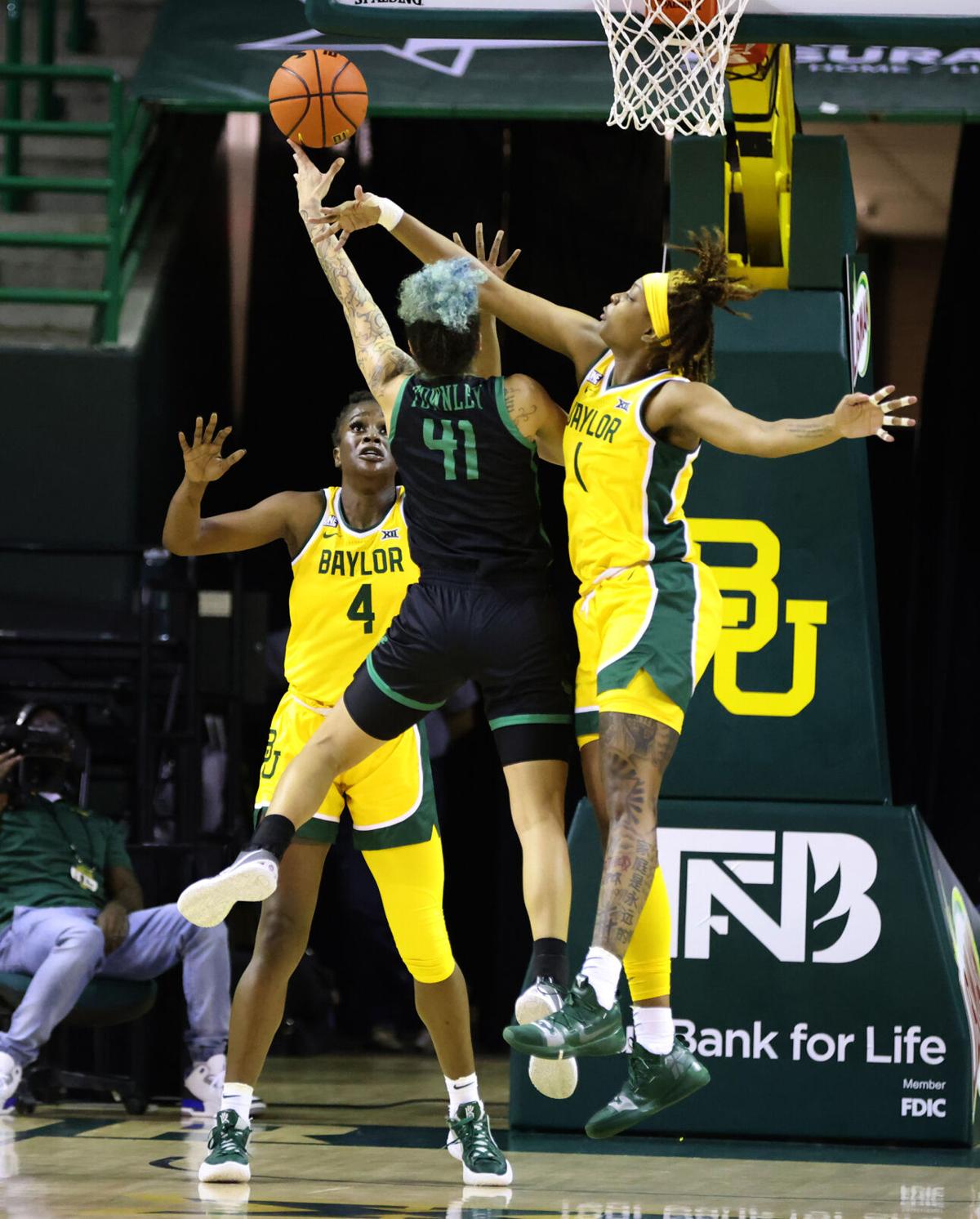 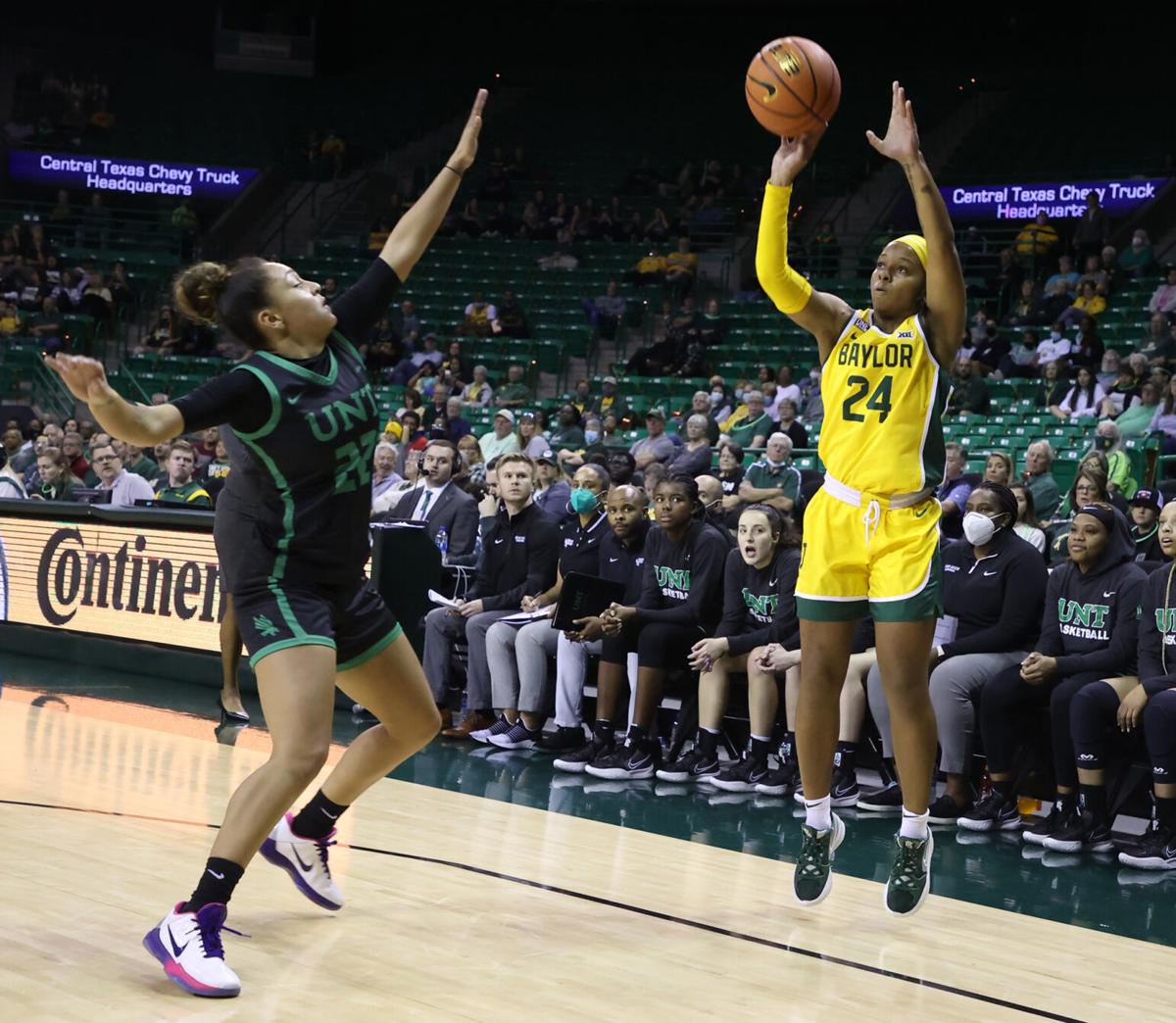 Basketball fans had a lot of choices in the Waco area on Wednesday night.

They could’ve headed over to the Midway High School gym to see a pair of local teams play for M.T. Rice Tournament championships. Or they could show up at the Ferrell Center to see one of the best players in women’s college basketball put on a show against the North Texas Mean Green.

North Texas couldn’t contain Smith, who controlled the game and stirred the Bears’ inside-outside offense as they claimed an 86-65 victory.

Anytime Smith got her hands on the ball, North Texas was in danger of giving up a bucket. She hit 14 of 21 field goals, scoring in half court set plays as easily as transition and finished with a game-high 28 points to go along with 11 rebounds.

The only time North Texas was able to trade baskets with 10th-ranked Baylor was when Smith went to the bench in the second quarter.

When the Bears’ star forward was in the game, everything seemed to work. Not only did Smith have her second-highest point total of the season, a bunch of her teammates got in the act.

Baylor point guard Jordan Lewis finished with 13 points and seven assists. Center Queen Egbo had a double-double with 12 points and 11 rebounds. Caitlin Bickle came off the bench to score 13 points and Sarah Andrews tallied 11 to give the Bears five players in double figures.

“We had good balance that way,” Baylor coach Nicki Collen said. “I felt pretty good about our effort and especially how we came out at halftime. We put that 6-0 run on them and I think that was the difference in the game.”

It was an all-around effective effort for Baylor (10-2) in its final nonconference game. The Bears start Big 12 play at Kansas State on Sunday.

Houston Baptist was originally scheduled to come to town for this holiday week game. However, COVID-19 issues kept the Huskies away and the Bears were able to schedule North Texas.

Collen said she handled the scouting duties herself and liked the results.

“They hadn’t played a Power 5 team with kind of our size,” Collen said. “I just knew they had guards that were going to really attack us and get us in rotations. I’m just proud ultimately of how we got in transition.”

Baylor led by 11 at halftime, then enforced its will to start the third quarter. Egbo, Lewis and Smith got buckets on the Bears’ first three possessions and just like that they had extended their largest lead of the contest.

“We challenged their shots, so even though they weren’t turnovers, they were shots that almost looked like turnovers and we ran out on them,” Collen said. “It’s kind of amazing sometimes how a transition layup or two kind of gets you going and makes the open 3s, makes the jump shots that much easier.”

North Texas (6-4), which flirted with making it a competitive game in the second quarter, never managed to get closer than 12 after Baylor’s flurry to start the third quarter.

Smith simply had too much length and skill around the basket, as she demonstrated on one of her final baskets. Starting at the top of the key, Smith set up for a 3-pointer, then drove the lane for yet another layup.

That basket put Baylor comfortably in front by 24 with more than six minutes left.

Bickle fought off a North Texas challenge late in the first half.

Baylor built a 15-point lead early in the second quarter when Smith hit a jumper, but then the Mean Green began to claw its way back.

North Texas’ Aly Gamez and Jazion Jackson each hit 3-poitners and Gamez added a pair of free throws to cap an 8-0 run.

Bickle responded by hitting a 3-pointer from the left wing.

The Mean Green kept coming as Quincy Noble made a jump shot and Jackson tossed in another trey that cut Baylor’s advantage to six with 2:42 remaining in the first half.

But less than 20 seconds later, Bickle answered again with a 3-pointer from the top of the key. On the Bears’ next trip down the floor, she added a mid-range jumper, keeping Baylor ahead by nine.

Bickle went to the break with eight points and four rebounds.

“I don’t know if she knew this, but she was shooting 18% from 3 coming into this game,” Collen said. “I think going 3 for 4, I think it’s important. It’s a dimension she brings when she comes in is the ability to stretch, the ability to be a high-low passer.”

Smith led the Bears in the first half with 12 points despite sitting for the final seven minutes of the second quarter. She picked up a technical foul, apparently for shouting at North Texas’ Amber Dixon after Smith made a shot in the lane. The Bears forward got whistled for her second foul after reaching over the top of Gamez for a loose ball with 7:26 remaining in the second quarter.

Lewis had 10 points at halftime. She, Bickle and Andrews each made a pair of treys in the first half.

Get local news delivered to your inbox!