Romelu Lukaku Was ‘not Happy With Situation’ At Chelsea – Sky Sports

Romelu Lukaku told Sky in Italy earlier this month he was “not happy” with the situation at Chelsea, questioning Thomas Tuchel’s system and talking up the prospect of returning to Inter while he is still playing at a “good enough level”.

The 28-year-old moved to Chelsea in the summer for a club-record £97.5m, ending a two-year stay at Inter which culminated in the club winning Serie A.

Since re-signing for Chelsea – a decade after he initially joined the club – Lukaku has scored seven goals in 18 appearances, but was hampered by an ankle strain before contracting Covid-19.

As a result, Lukaku has completed 90 minutes in the Premier League just once in their last 13 matches – the most recent outing when he scored in the 1-1 draw against Brighton.

“Physically I’m doing great. I’m just not very happy with the situation, but that’s normal,” Lukaku said. “I think the boss has decided to play a different formation but I have to stick at it and get on with it professionally.

“I’m not happy with the situation but it’s my job and I mustn’t give up.”

Lukaku swapped Manchester United for Inter in 2019 and scored 34 goals in 51 appearances in his first season in Italy.

The former West Brom and Everton striker then netted 30 times in 2020-21, including 24 goals in Serie A as Inter won their first Scudetto in 11 years.

Chelsea came back with an £97.5m offer and confirmed the signing of Lukaku on August 12, and the Belgian has said he regrets the manner of his departure from Inter before adding he is confident that he will one-day return.

Lukaku added: “I don’t think any of it should have happened the way it did. The way I left Inter and the way I communicated with the Inter fans. I’m annoyed about that because it’s not the right time now but it wasn’t the right time when I left either.

“I always said that I love Inter and I’ll play for them again. I really hope so. I fell in love with Italy. 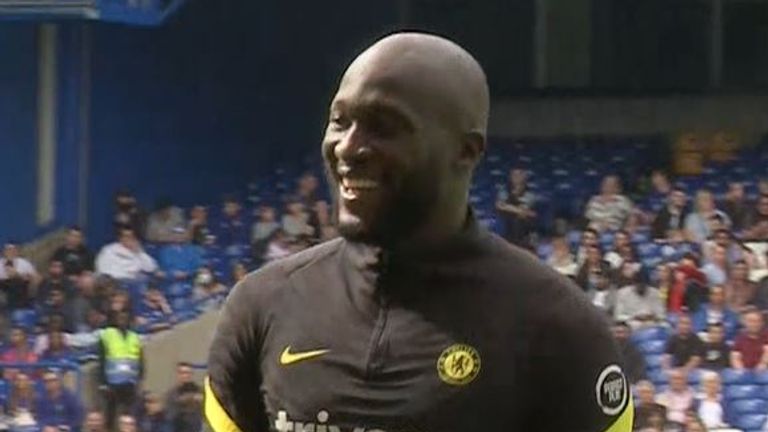 “Now is the right time to talk about it and tell people what really happened, without saying anything bad about anyone, because I’m not like that.

“I want to really apologise to the Inter fans because I don’t think I should have left Inter the way I did. I should have spoken to you guys first, especially after everything you did for me, for my family, my mum, my son. I’ll never forget that.

“I hope from the bottom of my heart to go back to Inter and not at the end of my career but when I’m still at a good enough level to win more trophies.”

Lukaku was an injury concern after withdrawing from Belgium duty in early October due to “muscle fatigue”, and though he then played 77 minutes against Brentford on October 16 an ankle sprain against Malmo four days later led to a spell on the sidelines.

Before the Malmo match, Tuchel had already said Lukaku was “mentally tired”, blaming a dry spell in front of goal on the fact he was playing too much football.

After six games out, there were then four league matches where Lukaku was in the matchday squad, coming on as a substitute each time – against Manchester United, Watford, West Ham and Leeds – racking up 77 minutes but failing to find the target.

He started and scored in the 3-3 draw with Zenit in Chelsea’s final Champions League group game, but after a brief cameo against Leeds, he then missed three matches due to Covid, against Everton and Wolves in the league and Brentford in the Carabao Cup.

The forward’s first match after his return from Covid was against Aston Villa on Boxing Day, where he came off the bench at half-time to inspire a comeback 3-1 win.

FREE TO WATCH: Highlights from Chelsea’s win over Aston Villa in the Premier League.

Speaking to Sky Sports after the victory, Lukaku spoke of his frustration at being stuck on the sidelines.

“I think I needed a performance like this today, it has been difficult as every player wants to play,” he said.

“The manager has his reasons but I kept working hard. Today it was good for us to win, and I am happy with my performance.”

Meanwhile, Tuchel said Lukaku’s 45 minutes against Villa went against medical advice and voiced his concerns over whether it would impact the striker’s return to full fitness.

Tuchel said: “He [Lukaku] had a very good performance, he was very helpful, but it’s not fair. He’s not ready for that even if he wants it.

“We just put the players in but we don’t know [what the impact is]. He was a game-changer today.

“There is no doubt he is super-important. Romelu will be a key player. Last time he started for us was in October, not because of quality or that we have any doubts we are better without him. He is unlucky to get injured.

“When he was struggling to come back in the schedule we have, he caught Covid. It [45 minutes] was more than the fitness and medical department recommended for him but we thought we could take the risk and be more offensive.”

Analysis: Which change is Lukaku referring to?

Lukaku’s main gripe seems to be with a “different formation”, but it’s difficult to see which change the Belgian is referring to. When Lukaku joined Chelsea, Tuchel was immediately asked what this would mean for the 3-4-2-1 system that helped them back into the top four and to Champions League glory.

Tuchel said in August: “We now have the chance also to play with two strikers, like they did at Inter with [Lukaku], or to continue with three strikers. We will see now how this works out.”

Was Lukaku promised a consistent strike partner in Timo Werner, someone to drop deep and do the dirty work while he worked the key areas in the penalty area and on the shoulder of the defender? For Inter, Lukaku had Lautaro Martinez or Alexis Sanchez beside him for practically the entire season, but for Chelsea that partnership role is unclear.

Lukaku and Werner have started only five times together this season, and only twice as a traditional front two. In the first of those two games, Lukaku and Werner were isolated in a 1-0 home defeat by Manchester City, and in the second they barely escaped Brentford with a 1-0 victory. Elsewhere, in Lukaku’s absence, Werner has been given opportunities to find form, but hasn’t grasped it, and Tuchel has more than often opted for a front three.

After returning from injury in late November, Lukaku was given only chunks of minutes – eight against Man Utd, 21 against Watford, 45 against West Ham and three against Leeds – opting to play a false nine in Kai Havertz on several occasions.

Tuchel will of course claim he has been protecting his £90m signing on his return from injury, but like any player, Lukaku wants to be on the pitch as much as possible. He said after the win at Villa on Boxing Day: “I think I needed a performance like this today, it has been difficult as every player wants to play. The manager has his reasons but I kept working hard.”