Intel (NASDAQ:INTC) has been losing market share to Advanced Micro Devices (NASDAQ:AMD) over the past few years. A combination of chronic manufacturing delays and other missteps at Intel, good products from AMD, and bleeding-edge technology at third-party foundries have enabled AMD to erase many of Intel’s long-held advantages.

But Intel still has one thing that AMD can’t match: its own manufacturing facilities. While AMD relies on third parties to make all its chips, Intel makes most of its chips in-house and outsources what makes sense. In a world where demand for chips is high and manufacturing capacity is tight, Intel has much more flexibility. 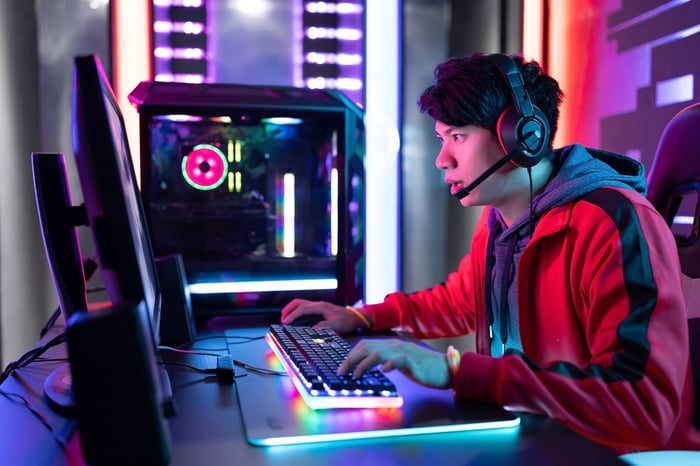 The king of low-end gaming

This is probably one reason AMD’s latest batch of desktop PC processors ignored the lower end of the market. When you can only make so many chips, it makes sense to focus on high-priced, high-margin products. AMD’s Ryzen 5000 series doesn’t include any products priced below $200. Anyone looking to build a budget gaming PC using an AMD processor is stuck with older chips.

Intel reclaimed the overall gaming crown with its Alder Lake chips. For anyone willing to spend more than $200 on a CPU, Intel’s latest chips provide the best performance for the price. AMD’s chips are still very competitive and good options, and they retain the benefit of being less power hungry, but Intel is back on top.

Intel could have taken the same approach as AMD and focused on higher-priced products, but it seems dead-set on winning back market share everywhere it can. Intel’s i3-12100 chip, a quad-core member of the Alder Lake family that’s priced at $129, is Intel’s ticket to winning back the low end of the gaming market.

Reviewers at Tom’s Hardware didn’t mince words: The i3-12100 provides “an unprecedented amount of gaming and application performance” for the price, and it’s “the hands-down winner” in this price range. For heavily multithreaded workloads, any AMD chip with more cores is going to win. But PC gaming performance is highly dependent on single-threaded performance. On that front, Intel’s new budget chip is spectacular.

Tom’s Hardware found that on the AMD side, only the $800 Ryzen 8 5950X was able to provide the same level of single-threaded performance as Intel’s little $129 chip. In gaming benchmarks, Intel’s budget chip routinely beat out AMD chips that are twice as expensive.

AMD will strike back later this year

Supply constraints in the semiconductor industry may be a reality for a while, so it’s hard to know whether AMD’s upcoming Ryzen 7000 series will provide an answer in the budget category to Intel’s i3-12100. AMD’s new chips will use a more advanced manufacturing process than its current chips, which should provide significant performance and efficiency gains. But if manufacturing capacity remains tight, AMD may opt to focus on higher priced chips again.

Intel CEO Pat Gelsinger is optimistic that Intel won’t relinquish its lead in the PC market. In a video posted earlier this year, Gelsinger said: “AMD in the rearview mirror in clients [consumer market], and never again will they be in the windshield; we are just leading the market.”

AMD is not the same company it was even five years ago, so this victory celebration is probably premature. But Intel has certainly made up a lot of lost ground with Alder Lake, and it has the potential to win back quite a bit of market share by dominating the budget portion of the market.

This article represents the opinion of the writer, who may disagree with the “official” recommendation position of a Motley Fool premium advisory service. We’re motley! Questioning an investing thesis — even one of our own — helps us all think critically about investing and make decisions that help us become smarter, happier, and richer.